Is That Chicken? – The Death Support review 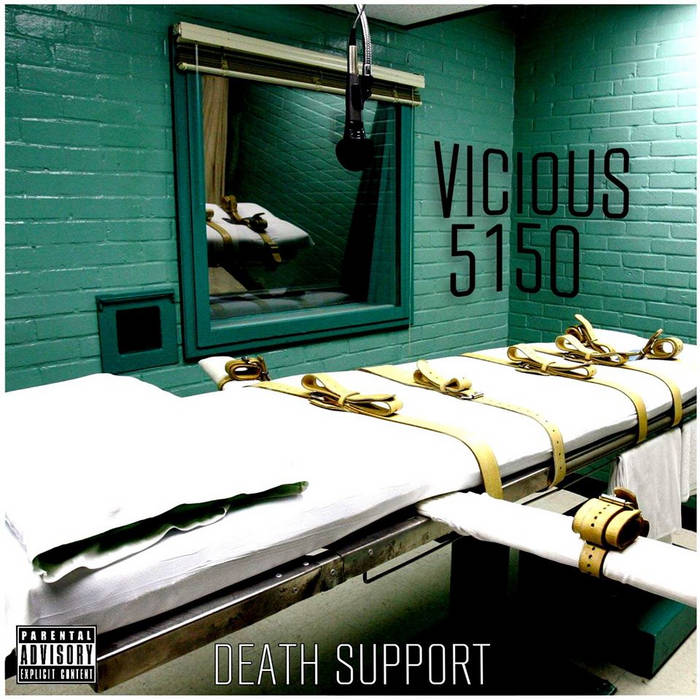 Yooooooooooo. Sup muhfuckaz? Today I have the honour of bringing you some of POCO’s finest underground horror rap. Vicious 5150’s Death Support is his 10th studio album – yeah you read that right. 10th. Studio. Album. So you know this motherfucker is doing something right. Enough people like this guys raps enough to encourage ten fucking albums. We recorded a track a while back but it never saw the light of day….. So here it is, Vicious 5150’s “Death Support”.

Recipe for Disaster: Yo, I fucking love intro tracks with substance. Not just a beat fade in or out or some fuckin voice over skit about whats going in your head. An introduction is still part of the show and too many fucking rappers treat it as the prelude. This intro track does just that. It sets the stage for the album with a laid back beat reminiscent of Ice Cube’s Death Certificate.

All It Took: This track continues that west Coast vibe with drums that could be sampled from the Tom Tom Club’s Genius of Love track. Or the instrumental of Mariah Carey’s Fantasy. I dig that this motherfucker does his own engineering, mixing, beats you name it. I feel like this track is building on my earlier statement of what it took Mr. Siso to get to his 10th album.

About your Audience: I am fully entranced by the old school west coast vibe of this track. In this track Vicious spits about how entry level emcee’s start spitting the same regular pimps, hoes and drugs thinking thats the shit that muhfuckaz wanna hear. And after ten albums – you can bet 5150 knows his audience.

Chances: This intro is bonkers!! The hook mellows out the breakbeat with some airy chords and lyrics about taking chances. After some double time raps at the end of the second verse this mutherfucker says something about “an uppercut with the butt of a gun/ do something improbable like FUCKING A NUN”. Word. I love being rude. Not super rude but this lyric definitely qualifies! And the outro break is dope. Pretty Decent.

Land of the divided zero: Fuck this track. Couldn’t feel it. Although it did feel like it belonged in this collection of tracks. So yeah.

SISOLude: YO. This track is like the drink break on the #TreeTox album. Reminds me of the instrumental breaks that DJ Quick and Muggs would do. I can tell that there is no sample in this track though – I’m feeling it.

*Realizes songs are going by too quick, sparks another blunt*

Reflection: I’m fucking dumb. I just noticed the tags in Vicious 5150’s profile and he has tagged his music as “Trip Hop” and “experimental G-Funk” which sums it up perfectly. Vicious’ shines here riding over his own beats and at 3:08 it’s his second longest track on the album. I’m totally into this album at this point.

Cool Breeze: The synthetic substitution drums come in nicely here and are overlayed with another breakbeat in the background. The layering is dope on this track. IT’s not a song that makes me think of a cool breeze though. And then it faded out and I was super glad that I wasn’t high as fuck on shroomz.

Too Many Brews: This shit happens to me all the fucking time. This song really hits home. Empty bank account, hung over, waking up in places you aren’t fuckin familiar with . Don’t puke on the floor! The skits are pretty fucked on this one too…… Is that Chicken?

Amscray: This album has been pretty good at sampling video clips but my favourite is all of the clips of people saying fuck off. Ricky from the Trailer Park boys, Bricktop from Snatch, FUCK OFF. And here Mr. Siso raises 2 fingers to all the fuckboy emcee’s that don’t have the 10 studio album clout he has.

News at 6: And a clever use of the FHRITP audio as well as some other popular news bloopers. Vicious spits about the stupidity of the daily news.

Tale End: Vicious weaves in some fictional characters a la Ice Cube’s Gangsta Fairytale 1 & 2 and reminds us of how he has supported the death of wack emcees.

My advice: Buy that shit. Or Fuck Off like Cyrus! Here’s his bandcamp link.